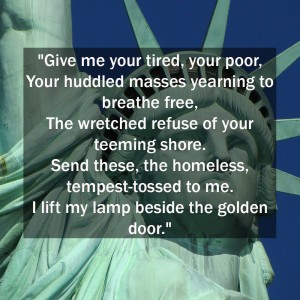 I posted the image in response to Trump’s potential decision to put a temporary ban on most refugees as well as suspending visas to people from numerous countries, mostly in the Middle East. I’ve already written about the refugee crisis and how we as Christians should respond. We can’t allow our fears for safety and security keep us from doing the right thing.

This post isn’t really about my stance on refugees, though. I posted that picture to Instagram and Twitter, but didn’t post it to Facebook. Perhaps I’m still stuck in youth pastor mode, where I filtered what I would post to Facebook because I didn’t want to get any backlash from parents. Not that I was posting pictures of me shotgunning a beer, but because parents didn’t think I should be encouraging their children to slay dragons in Skyrim or spend any time reading about the wizarding world.

Social media have altered the way we think about ourselves and how we present ourselves to others. When I was younger I wrestled with self-esteem and wondered how much people really liked me. I still have those insecurities, but now there’s a quantifiable way for me to gauge them. If 40 people liked my Instagram photo and 10 people commented on my Facebook post, then my self-esteem gets pretty high. If I send out a tweet, though, that doesn’t get any likes or retweets, then I can get down on myself.

Social media have also impacted how we present ourselves to others. I control my audiences my choosing what content to share with them. Twitter and Instagram got to see my displeasure with our administration, but everyone on Facebook is free to think what they want. I don’t want to be as honest with the audience on Facebook because I don’t want to deal with the consequences. Vulnerability and honesty have always opened us up to consequences, but now we just have a much larger audience. Before I’d risk making myself vulnerable to two or three people in real life. Now, if we share something on social media, we’re making ourselves vulnerable to hundreds or thousands of people.

I don’t feel like not sharing something on Facebook but sharing it on other platforms makes me dishonest. Really, we’re all a little dishonest with what we share on social media. Social media offer small windows into our lives, windows over which we have complete control. I’d much rather share a picture of Clara enjoying The Force Awakens then me giving her an exasperated stare when she doesn’t want to go to bed.

I love social media in spite of all their flaws. They can do a lot more good than harm if we’re willing to be thoughtful in how we use them. Perhaps I should have put more thought into posting that picture on Facebook, or maybe I put too much thought into it to begin with. It’s just a picture and I shouldn’t be scared of or excited for the feedback.